An Evening with William J. Bratton 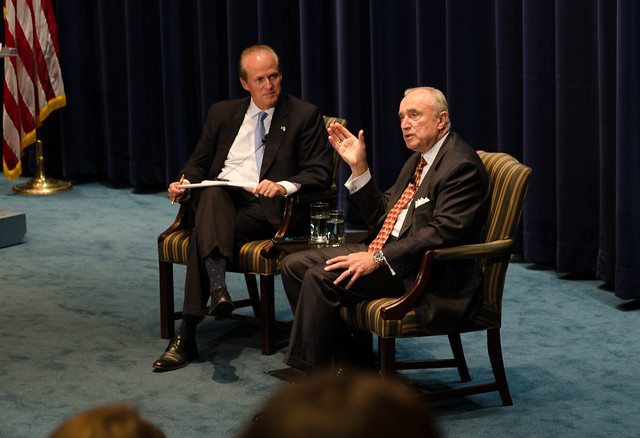 Commissioner Bratton spoke to a crowd of 150 attendees about the importance of first impressions of law enforcement and the need for officers to be respectful and engaged in their communities. He shared a story of his first experience with a police officer to highlight how encounters with law enforcement matter.

Out with his father for driving lessons in the 1960s, the future Boston (MA) Police Commissioner stopped at a red light behind a police car. The officers were distracted and hadn’t noticed the light had changed. “The light turned green and my dad told me to honk the horn,” Commissioner Bratton said. “My dad didn’t like abuse of authority, I don’t like abuse of authority and I think I get that from him.” After honking his horn and going around the police cruiser, he and his father were pulled over by the officer who then approached their vehicle with a lit cigarette hanging from his lips. Commissioner Bratton recalled, “The officer leaned on the window and asked me ‘who the [expletive] do you think you are?’ That was my first encounter with a Boston police officer. Fifty years later and I still remember that.”

Craig W. Floyd, President and CEO of the National Law Enforcement Officers Memorial Fund, asked Commissioner Bratton about the future of law enforcement and his unique perspective having been the only person to serve as the top cop for the Boston, New York and Los Angeles police departments.

“Despite the troubles that we are dealing within America and the world today, I am optimistic because I remember where we were in 1970 and I see where we are [today], particularly in New York City,” Commissioner Bratton stated. “New York City is the future of the world — that’s what the world is going to look like in 50 years. It’s a city where 40 percent are foreign born, almost 70 percent are not born in the city. It is the most racially and internationally diverse city in America.”

Commissioner Bratton was critical of some law enforcement leaders who he says are misusing and over-prescribing tactics such as ‘stop-question-frisk.’ “These tactics should be used like a doctor prescribes medicine,” he said. “As the patient gets better, you must lower the dosage.”

Mr. Floyd also asked the commissioner about the most recent terror attack in New York City where a man used a rented truck to kill eight pedestrians and leaving 15 others injured. Commissioner Bratton outlined the extraordinary steps the NYPD has taken to restructure itself under his most recent tenure, including the addition of 600 counterterrorism officers who are briefed on global threats, as well as a new 800-officer strategic response division.

Commissioner Bratton ended the evening by taking questions from the audience ranging from his thoughts on leadership, to his experience establishing CompStat, a crime reduction tool used in many police departments, and his input on building strong community bonds.

Watch the full coverage of the evening’s discussion.